The battle of the “three stripes” continues: Adidas vs. Thom Browne 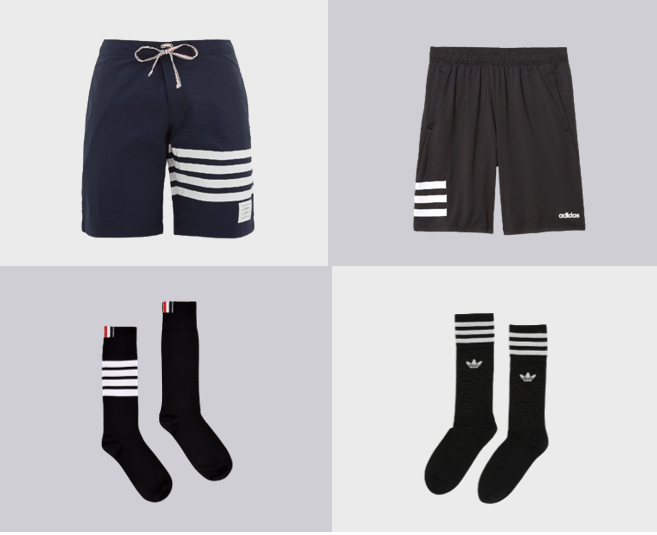 Following a decade-long debate, the trial between Thom Browne and Adidas over the use of a four-stripe logo by Thom Browne has begun. In what is proving to be one of the fashion industry’s most committed trademark battles, Adidas is on a legal quest to protect its stripes, arguing Thom Browne’s four bars mark is too similar to its own three-stripe logo and could mislead consumers. The two brands have been “discussing” the use of the stripes for years, but this time round, the German sportswear giant is  seeking $8 million in damages for trademark infringement and $7 million in lost sales.

Adidas first raised concerns about Browne’s use of the stripes in 2007, when Browne agreed to alter a three-stripe design to one with four stripes following Adidas’ complaint about the use of three horizontal parallel bands on Browne’s clothing.

Things then seemed to calm a little until 2018 when Adidas opposed Browne’s trademark application in the European Union and matters have now escalated to the U.S. District Court for the Southern District of New York. In December 2020, Adidas filed a complaint with the U.S. Patent and Trademark Office’s Trademark Trial and Appeal Board, requesting that the board block Browne’s three pending trademark applications for red, white, and blue striped trademarks on footwear. Adidas alleges that these marks are too similar to its own pre-existing trademarks and may cause confusion among consumers.

The sporting goods company claims that Browne is unlawfully competing with it by offering sports apparel and footwear that bear a confusingly similar imitation of its well-known three-stripe mark.

Adidas alleges that consumers may mistakenly believe that Browne’s products are affiliated with or originate from Adidas, when in fact they do not.

According to Adidas, Browne’s use of stripes in a manner that is similar in appearance and overall impression to its own three-stripe mark, and the similarity of Browne’s products to those offered by Adidas, increases the likelihood of consumer confusion.

In addition, Thom Browne attempted to invalidate one of Adidas’s three-stripe trademark registrations during 2022, arguing that the mark, which consists of “three diagonal quadrilaterals positioned parallel to each other upon a contrasting background,” puts competitors at a disadvantage because it “is not limited to any specific number or orientation of stripes.”

Browne’s counsel claimed that Adidas is “asserting its registered trademark against Thom Browne over its use of four horizontal, parallel bands,” thereby admitting that its three quadrilaterals mark “is not limited to a diagonal orientation or to three stripes.” Browne, which was acquired by Zegna Group in 2018, has maintained that there have been no instances of actual confusion between its use of four horizontal parallel bands and Adidas’s use of three stripes.

Magistrate Judge Lehrburger rejected Browne’s arguments in his September 2022 recommendation and report, stating that Browne “has not alleged that the use of three parallel stripes – the subject of the challenged Adidas registration – is ‘essential to effective competition in a particular market'” and therefore failed to “assert a plausible claim that the trademark protected by the challenged registration is aesthetically functional.” Judge Jed Rakoff, who was presiding over the trial, accepted this recommendation and ruled in favour of Adidas in October 2022.

Charles Henn, the lead counsel for Adidas, argued during this week’s opening statements that Adidas has consistently maintained strong rights to the three-stripe mark since 1952, spends approximately $300 million annually on advertising products featuring the mark, and generates over $3 billion in revenue from apparel and footwear adorned with the three stripes.

Adidas’ legal representative has reiterated their argument that Browne is not just producing high fashion items with the striped logo but is also actively and increasingly entering the sportswear market, including through a growing range of sports-related clothing and official partnerships with sports teams such as FC Barcelona. This could potentially lead to confusion among consumers, according to Henn, citing survey data indicating that almost 30% of consumers associate striped Thom Browne products with Adidas.

In its defence against Adidas’ allegations of trademark infringement, Thom Browne has highlighted the differences in the two companies’ market positions and price points, stating that the two companies operate in different markets, with Adidas in sportswear and Thom Browne in high fashion, and therefore are not in competition with each other. Robert Maldonado of Wolf, Greenfield & Sacks, counsel for Thom Browne, has also argued that Adidas waited too long to take action over its use of stripes, which it claims is different from the three stripes design for which Adidas holds a trademark. Maldonado claims that Adidas knew about Thom Browne’s use of a design featuring four horizontal parallel bands on its clothing as far back as 2007 but did not complain about it until recently.

Thom Browne’s legal team also indicated that they will be arguing about the extent of Adidas’ trademark rights during the trial. They have stated that these rights are much more limited than Adidas has claimed, and will also be discussing the use of stripes by other brands, including the original Varcity stripes, in an effort to undermine Adidas’ claims. These arguments are expected to be presented in the coming days.

Adidas is well-know for being litigious when it comes to its striped mark and this argument is reminiscent of the 2003 Judgment of the Court (Sixth Chamber) of 23 October 2003 in the case of Adidas-Salomon AG and Adidas Benelux BV v Fitnessworld Trading Ltd, in which the Court ruled that the use of the Adidas three-stripe mark on clothing was not in competition with the use of the mark on sporting goods.

Similarly, in the 2008 Judgment of the Court (First Chamber) of 10 April 2008 in the case of Adidas AG and Adidas Benelux BV v Marca Mode CV and Others, the Court ruled that the use of a two-stripe mark on clothing did not infringe on Adidas’s three-stripe mark, as the marks were not used in relation to similar goods or services.

However, this doesn’t mean an automatic win for Adidas in this trial. The fact that Thom Browne is an established designer in the luxury space, not an opportunistic fast-fashion brand or counterfeiter, could lead to a very different verdict. Consequently, the ruling in this case is very interesting as it could potentially extend the ability to protect trademarks throughout the fashion industry and beyond. Regardless of the outcome, the Adidas-Thom Browne case will establish new guidelines for how brands approach this issue going forward.

Following our recent assessment of the ongoing legal feud between Thom Browne and Adidas (link to article), the case ended last week in the favour of the underdog.

In a somewhat surprising outcome, Adidas lost its trademark claim against luxury fashion brand Thom Browne, after a jury in Manhattan’s Southern District Court found that there was no infringement of the brand’s use of stripes.

A spokesperson for Thom Browne stated, “We are pleased that the jury found that at no time did Thom Browne Inc. infringe on any of Adidas’ trademarks. For over 20 years now, Thom Browne has been a pioneering force in luxury fashion, bringing a wholly unique and distinctive design aesthetic that combines classic tailoring with American sportswear sensibilities. We look forward to continuing to design and provide the creative products that have become the hallmark of the Thom Browne label.”

Adidas, which sought damages and a percentage of lost sales totalling nearly $8 million, argued that Thom Browne “expanded its product offerings far beyond its formal wear and business attire specialty,” claiming the company is “selling athletic-style apparel and footwear featuring two, three or four parallel stripes in a manner that is confusingly similar to Adidas’ three-stripe mark.”

Like many others, we have been closely following this case as the decision could have implications for trademark protection in the fashion industry (and beyond) as it suggests that using stripes as a design element may not be considered enough to infringe on a trademark, especially if the number of stripes used is different and the products are marketed to different customers and sold at different price points.

While this is only one case, this verdict now leaves the use of similar design elements in a slightly greyer area as it could make it more difficult for companies to successfully claim trademark infringement based on this point. Companies will need to present even more detailed information, specific facts, and evidence to prove infringement on their mark(s). 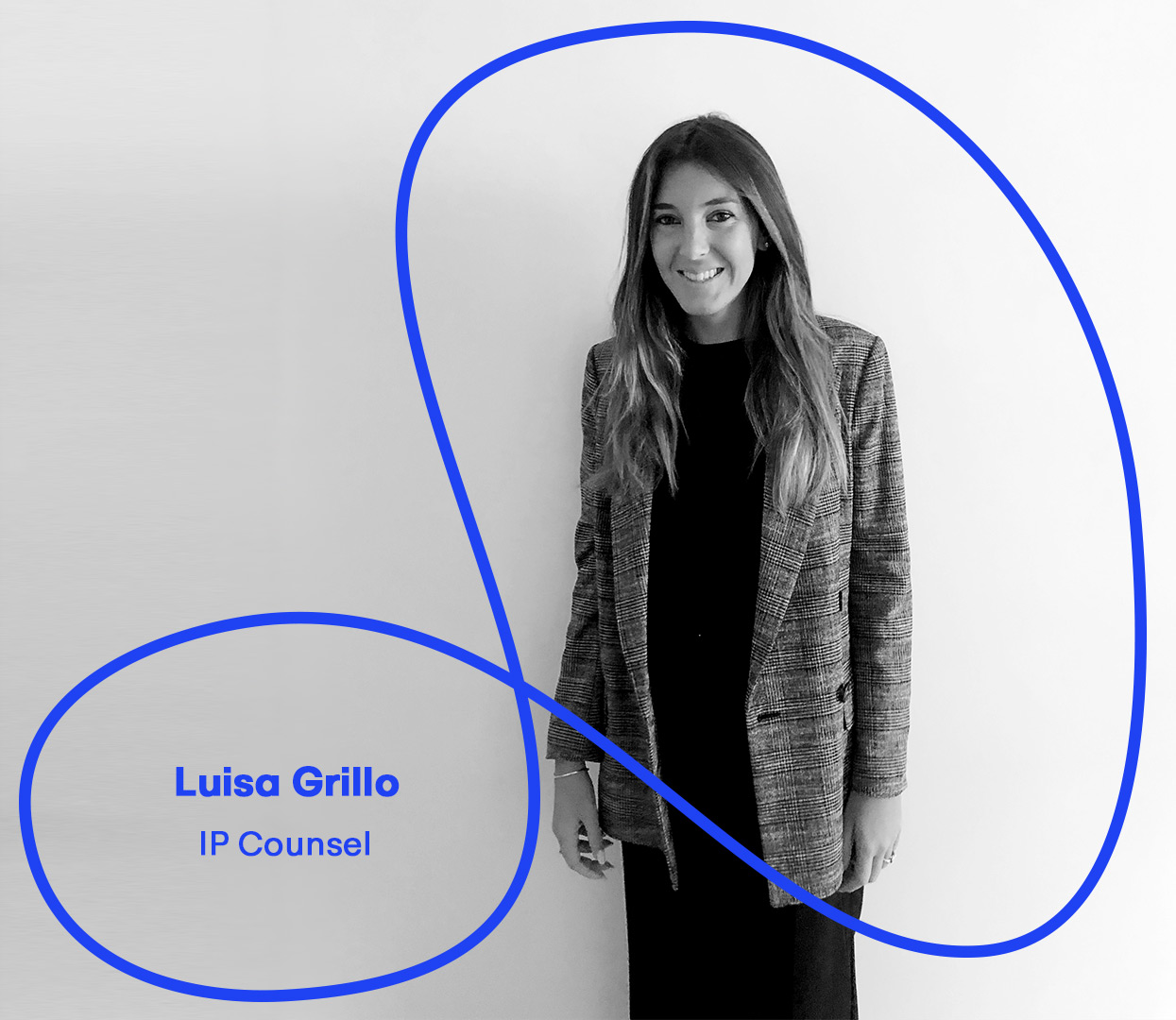 Music is my first passion and I love singing, whether that is in the shower or in a local karaoke bar. I also like to keep fit and am often found hitting the ski slopes, playing a game of padel or taking a cross-training lesson at the gym. When not on the go, I'm also quite partial to a glass of wine.

As an IP Counsel, I specialise in legal brand protection and intellectual property law. I am a qualified Attorney at law and advise clients on all kinds of IP matters, with a particular focus on trademark management and strategy, competition law and innovation as well as private and tech law.