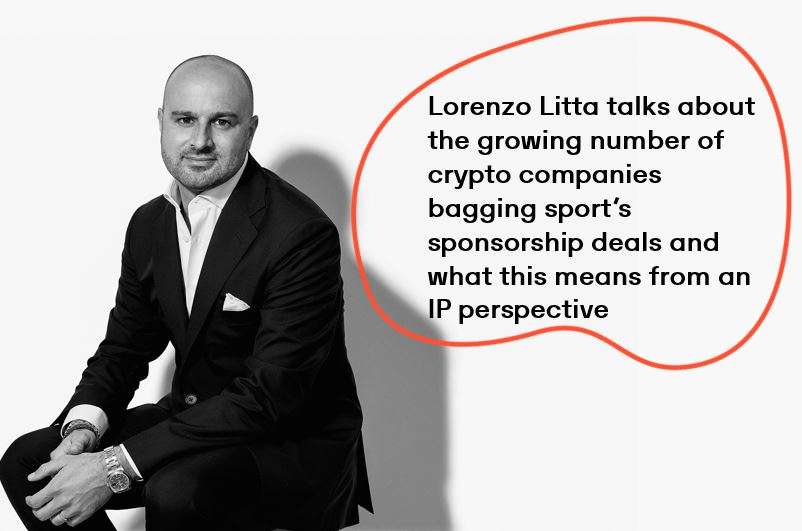 Interview with Lorenzo Litta talking about the growing number of crypto companies bagging sport’s sponsorship deals and what this means from an IP perspective.

The global crypto population has increased by +178% in 2021 and is predicted to reach 1 billion by the end of 2022. However, just a fraction of those are currently the company’s customers.

As cryptocurrency companies seek to reach mainstream audiences, some platforms are spending hundreds of millions of dollars to sponsor sports teams, stadiums and large mainstream events in a bid to woo new fans.

With an abundance of money from enthusiastic investors, a growing number of crypto brands are on a spending spree to reach a mass audience through sports sponsorships and mainstream events. For example, recent deals include the cryptocurrency platform Crypto.com has bagged high-visibility sponsorship deals with the renaming of the iconic Staples LA Lakers arena, Formula One, the UFC, Italy’s Serie A, Paris St-Germain, the NHL’s Montreal Canadiens and the Philadelphia 76ers’ kit, the cryptofinance company XBTO sponsoring the Major League Soccer team Inter Miami, the cryptocurrency exchange FTX sponsoring Mercedes-AMG’s Formula 1 team and the non-profit Learncrypto.com sponsoring the English Premier League team, Southampton F.C.

We spoke to Lorenzo Litta, BRANDIT’s CBO, about this and the impact this could have not only the sport’s industry but also from an IP point of view.

You can listen to the full podcast here: